God forbid, but the recent activity show as if the fissures are making a line, (connected crack) and what happens when the crack grows large enough and reaches the end of the island? It’s as if it is getting ready to break in half. 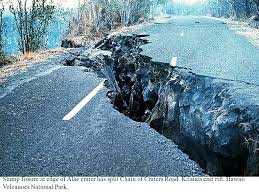 It shouldn’t take a scientist to tell people to evacuate.

Images taken on NASA’s Terra satellite show volcano fissures that have oozed lava and gas in recent days on Hawaii’s Big Island. The fissures are located in the East Riff Zone of the Kilauea volcano, which began erupting last week.

One image shows hot spots — fissures and new lava flow as of Sunday — in yellow. The red areas in the image, taken from the Advanced Spaceborne Thermal Emission and Reflection Radiometer (ASTER) on the Terra satellite, depict vegetation.

The gray and black areas show old lava flows, according to NASA.

Another image, also from Sunday, shows yellow and green streaks depicting sulfur dioxide gas, which can be dangerous at high levels.

The images were taken before two new vents opened up Tuesday on Hawaii’s Big Island. Those vents prompted Hawaii County to issue a cellphone alert ordering stragglers in Lanipuna Gardens to leave immediately.

Authorities had previously ordered nearly 2,000 residents to leave the community and the neighboring Leilani Estates, both located in the mostly rural district of Puna on Hawaii’s Big Island. But some had ignored the order and stayed to watch over their property.

“There were a number of people at their residences,” Talmadge Magno, the administrator for Hawaii County Civil Defense, said at a news briefing. There was no sign of holdouts in Lanipuna afterward, he said.

There are 14 lava-and-gas producing fissures in Leilani Estates, after the two new ones formed Tuesday. But the flow of lava is not constant.

Edwin Montoya, 76, had planned to stay to care for animals and keep looters away from his family’s property in the community. But he was forced to evacuate after the new fissures emerged, including one just a mile away.

“I’m in my truck right now on my way up the road,” he said. “The police came down here and made me.”

VOLCANOES NATIONAL PARK, Hawaii — The Kilauea volcano on Hawaii’s Big Island has been blowing off toxic steam and releasing lava for a week. But on Thursday, there were signs it could soon explode and widen the disaster.

Geologists are warning a possible explosion at the summit of Kilauea could be the largest in nearly 100 years, hurling boulders the size of refridgerators. The heavy clouds of smoke coming from the main crater on Wednesday were likely triggered by a rock fall from the crater walls.

As the lava levels inside the volcano drain lower, the danger of an eruption can actually increase. When the molten rock reaches groundwater levels, pressurized steam can cause an explosion, shooting rocks and ash miles away from the crater.