From Weather Internal. “A portrait of a spoiled child with adults using him for their own agenda and putting the spotlight over him. Evil in many ways. Opportunist.

“After heavy observation of this guy, reading his ridiculous tweets, hearing his dramatic Hitler-like speech, face emotions, and how when he’s cornered with a hint of truth he automatically brings in other people and says things like…. 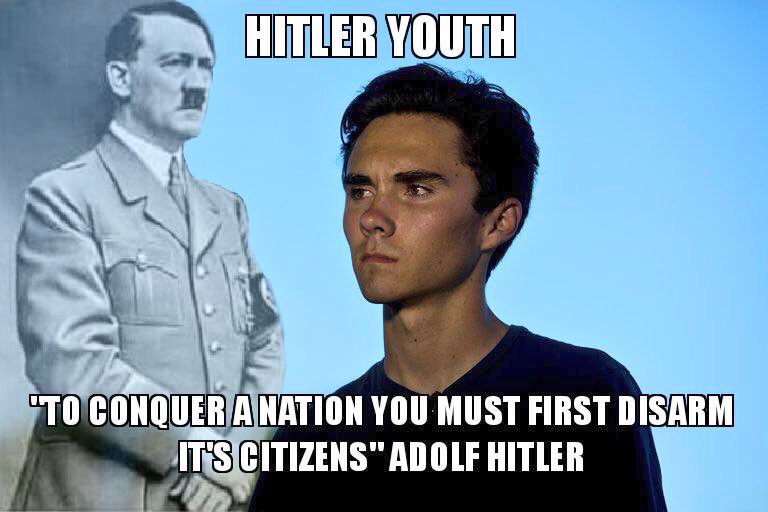 “This is a conundrum. You see, to the trained eye it goes like this; if you disagree or find Hogg’s statements appalling, you are seen as attacking a victim of a schooling shooting. I use victim very lightly as well. I explain why in a bit. Everything was fine up to this point. Why? Because dear David is taking the little bit of power he received from those with agendas and now is threatening Laura Ingraham with a boycott all because she, as a journalist and anchor, posted on how David was rejected by colleges. African Americans boycotted the bus services because of their racial seating arrangements on the bus, but dear David wants a boycott of Laura Ingraham’s sponsors because things got a little real for him. He is a manipulator, unfortunately.

“When I was his age, I was held up, face to face by four thugs, with four illegal guns, life flashing before my eyes and got out of it alive and grateful that the bullets didn’t hit me. Grateful! You see, I was a victim of gun violence; those kids who were shot or killed at David’s school or witnessed this were victims, NOT DAVID. The only thing he is a victim of are the adults using him like a puppet. I feel sorry for David. He has no idea … none. Now on to the articles.”

Fox News host Laura Ingraham’s put down of Parkland school shooting survivor David Hogg as a whiny high school kid has prompted him to mount something more potent than a whine — a call for an ad boycott.

Hogg, 17, is one of a half-dozen students at Marjory Stoneman Douglas High School, in Parkland, Fla., who helped build a national movement for gun control following the killing of 17 people by a  former student armed with an AR-15 style rifle on Valentine’s Day. Hogg was also a prominent speaker at a weekend march in Washington, D.C. calling for tightening gun laws.

Ingraham, who hosts a nightly show on Fox News, sought to cut him down with a tweet after he told TMZ that his bid to get into one of the four campuses of the University of California system was turned down, despite a 4.2 grade average and 1270 SAT score.

“It’s not been too great for me and some of the other members of the movement,” he said, blaming the “tsunami” of applications to college each year that makes it hard for an individual student to stand out.

Acknowledging that he was “absolutely disappointed,” Hogg noted that students like him are already changing the world. “If colleges want to support us in that, great, if they don’t it doesn’t matter, we’re still going to change the world,” he said.

David Hogg Rejected By Four Colleges To Which He Applied and whines about it. (Dinged by UCLA with a 4.1 GPA…totally predictable given acceptance rates.) https://t.co/wflA4hWHXY

in response, Ingraham thumped Hogg on Wednesday with a tweet: “David Hogg Rejected By Four Colleges To Which He Applied and whines about it.”

Hogg, who has 595,000 Twitters followers, fired back Wednesday night with a cheeky question: “Soooo @ingrahamAngle, what are your biggest advertisers .. Asking for a friend.@BoycottingramAdverts.”

Pick a number 1-12 contact the company next to that #

Rep. Nydia Velazques, D-N.Y., also weighed in with her own tweet: “I have to ask — @IngrahamAngle — honestly, what kind of a mother bullies a HS student who survived a school shooting and a massacre? These kids know more about grace and class than you’ll ever understand.”

That was quickly followed by a list of 12 sponsors, ranging from Sleep Number to Wayfair with Arbys and Liberty Mutual in between, and a call for a boycott.

The bid was reminiscent of ad boycotts of other Fox news hosts, Sean Hannity and Bill O’Reilly. After Hannity reported a conspiracy theory involving a slain staffer for the Democratic National Committee, he lost at least five advertisers, according to Fortune. At least 44 companies also pulled ads from O’Reilly’s show after allegations of sexual harassment. Fox eventually dropped the show entirely.

Hogg, an articulate, aspiring television journalist, spoke up early after the shooting, and had even taped real-time reactions from fellow students inside barricaded classrooms during the shooting. He quickly became a target of conservative pundits, who noted darkly that his father had been an FBI agent.

Other charges included false claims that he was part of a group of young actors who show up at the scene of shootings to go on camera, pretending to be a student. Some bloggers also questioned whether he was actually at the school at the time of the shooting, a claimed dismissed by Politifact.

As for his college options, Hogg said he was accepted at Florida Atlantic University, Cal Poly and Cal State San Marcos.

Meanwhile, Hogg and his fellow activists are trying to organize town hall meetings between young people and members of Congress in every congressional district to raise gun issues.

These Parkland activist kids may want to spend a little more time studying their history books and a little less time stumping for the Democrat party.

WHAT COULD GO WRONG? “David Hogg, one of the survivors of the Valentine’s Day Massacre at Marjory Stoneman Douglas High School, has been a vocal proponent of gun control as a means of protecting school kids. Now, his sister, Lauren Hogg, is attempting to stir the national debate with her ‘armbands for change’ movement.”

Lauren Hogg later deleted her tweet and apologized after James Woods schooled her on history:

“You might have a little trouble getting Jewish Americans to embrace this look. Do you have some shiny jackboots and brown shirts to go with it? Guessing maybe you skipped history class while you were shilling for the @DNC.”

They seem to be really embracing the full on fascism of the democrat party. pic.twitter.com/qdb4WKuBLv

Except there’s just one problem with her “movement.” And actor James Woods wasted NO time pointing it out.

You might have a little trouble getting Jewish Americans to embrace this look. Do you have some shiny jackboots and brown shirts to go with it? Guessing maybe you skipped history class while you were shilling for the @DNC… pic.twitter.com/WfA4jL9y65