As of Friday morning, Clinton’s memoir had five out five stars from 609 reviews.

Amazon was on the defensive end this week after receiving criticism for deleting negative reviews of Hillary Clinton’s new book.

The online retail giant acknowledged its decision to remove one-star reviews of Clinton’s memoir, What Happened, claiming they have the right to uphold reviews from legitimate customers.

“In the case of a memoir, the subject of the book is the author and their views,” an Amazon spokesperson told Fortune. “It’s not our role to decide what a customer would view as helpful or unhelpful in making their decision. We do however have mechanisms in place to ensure that the voices of many do not drown out the voices of a few and we remove customer reviews that violate our community guidelines.”

For the week of Sept. 3, What Happened is sixth on the most sold non–ficition list. As of Friday morning, Clinton’s memoir had five out five stars from 609 reviews.

ReviewMeta, a website that analyzes the authenticity of Amazon reviews, said that 25% of reviewers of Clinton’s book were “suspicious,” a designation it gives to reviewers who have only reviewed one title.

Earlier this week, Clinton told USA TODAY’s Susan Page that she is “convinced” there was collusion by Trump associates in the 2016 election. “There certainly was communication and there certainly was an understanding of some sort,” she said.

What Happened, which recounts her loss to Trump, has drawn criticism and support from both the left and the right of the political aisle. (more)

On Wednesday morning, Clinton’s book had nearly 1,700 reviews — 50 percent were one-star and 45 percent were five-star. But did that many people actually read Clinton’s entire 512-page book in just one day?

Clinton’s book publisher, Simon and Schuster, believed the answer was no — so they seemingly had Amazon remove upward of the 900 reviews.

“It seems highly unlikely that approximately 1,500 people read Hillary Clinton’s book overnight and came to the stark conclusion that it is either brilliant or awful,” Jonathan Karp, the book’s publisher, said. 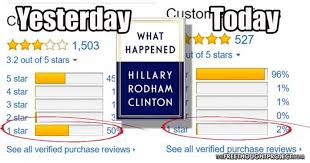 Why were they removed

Amazon told the Guardian they “remove customer reviews that violate our community guidelines,” including when “when we find unusually high numbers of reviews for a product posted in a short period of time, we may restrict the number of non-Amazon Verified Purchase reviews on that product.” All of the reviews deleted were unverified.

Amazon can’t just sell books, it has to alter how people feel about them. Via Yahoo, we saw the London Telegraph reported that “Amazon has been monitoring and deleting reviews after Hillary Clinton’s new book was greeted with a torrent of criticism on the day it was released.”

The result? As of Thursday night, fully 94 percent of Amazon’s 655 Hillary book reviewers have awarded the book 5 stars….and only 3 percent have disapproved with a one-star review. Guess who hasn’t reported on this website manipulation so far? The Amazon-owned Washington Post.

Few of the one-star reviews remain on the website, but reports and screengrabs show that reviewers used the space to criticise the former First Lady and spread conspiracy theories about her and Bill Clinton.

One one-star review, which remains on the website at the time of writing, reads: “Read all the promotional excerpts, which combined come close to book length – pretty good novel. It is fiction, isn’t it? Surely, someone is playing a joke.”

Amazon is rarely moved to delete reviews so publicly, although in November negative comments under a book by anti-Trump broadcaster Megyn Kelly appeared to be removed by the retailer.

It might seem obvious that not every reviewer has read the book, but it just offering an opinion on the author. But this isn’t just true for the one-star reviews. It’s just as obvious that Hillary die-hards would hit the 5-star button without reading it. A naive shopper may think this book is bowling over readers…instead of realizing this might be a very political campaign. (more)

If you though the was bad, they did the same for Megyn Kelly.

A report from Slate Tuesday showed that more than 75 percent of the book’s reviews were one star, but by Wednesday morning, USA Today noted that that number had been reduced to 17 percent.

According to the Los Angeles Times, the negative reviews began at “The_Donald” reddit page. The page consists of supporters of the president-elect and bears the Trump-Pence presidential campaign logo but has no official ties to the campaign.

One reviewer, identified as One Woman’s Opinion, said Kelly was “Confused as a feminist, lacking as a ‘journalist.’ Now she can add ‘failed’ as an author.”

New posts on the Reddit page note that many of the reviews have been taken down, with some calling Amazon’s actions “censorship.”